This last month seems like it was the craziest month yet! I guess that’s what happens when it’s the holiday season. Where do I even begin?! I think what stands out the most is that Braden is becoming more and more mobile. He’s been sitting up like a pro for a couple months, but now he’s about a couple weeks shy of crawling. He tries to crawl – and he wants to crawl so badly. As soon as I sit him down, he will lunge so far forward to whatever object he wants to touch. He’ll get onto all fours and rock back and forth. After a short time he’ll slide down to his tummy. Up until just recently he would start to whine. He is not a fan of laying down. But a couple of days ago he has officially begun the attempt at an army crawl. If he really wants something he will slither and slide his way on over. As excited as I am that he has begun to be mobile Braden, I am slightly scared that I will be chasing him all over the place. Guess it’s time to baby proof!!! 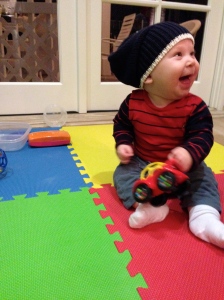 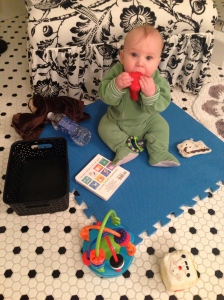 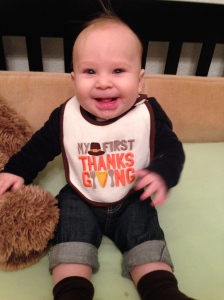 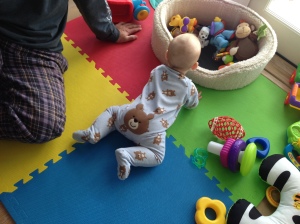 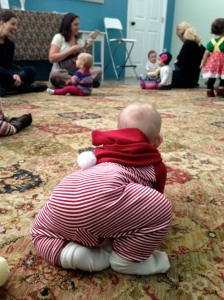 I took Braden to see Santa for the first time. He was very concerned about who this Santa person was – but he didn’t cry. The first time I took him, it was just the two of us. The second time, we went with the whole fam bam clan. He was sleeping right up until it was time for picture time, so he looks a little confused on where he is. But it’s a cute picture nonetheless. 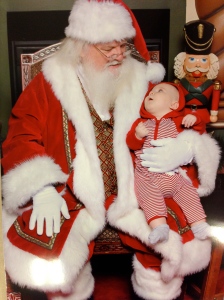 Braden also helped Grammy trim the Christmas tree. He loved the lights! He kept wanting to pull at them, so I took it as an opportunity for a mini photo shoot.

He also took the big leap of pulling himself up! I always put him in the crib to play around when I’m cleaning and can’t give him my full attention. I know he’s safe in there, or so I thought… I took out the trash one day, and I came back to him standing in his crib! Not just standing…but literally trying to pull himself up even higher. I was so shocked – not expecting for him to do that already. Of course I had to take pictures and plenty of video. Then I had to lower the crib – twice. He’s a strong little fellow!! Watch out work – Braden is coming at you!! 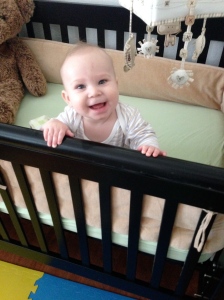 We also went to his first Christmas Party! We got to spend it with the lovely ladies and babies that we met at Mommy and Me. It was so fun to see all of our babies growing up! Some are crawling, sitting up, eating solids, and sleeping through the night! Wow! Where did the time go?! I hope we all stay friends and get to watch our kids grow up together. 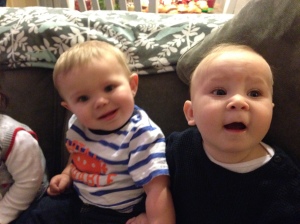 Braden took his first bath in the big peoples tub. I wasn’t planning on it, but he had no choice really. He had the biggest poop explosion of them all, and I just had to throw him in that tub. He was so fascinated with the faucet and the drain. And then he kept trying to crawl. It was a challenge that’s for sure. I think I’ll stick to giving him a bath in the kitchen sink, it’s a lot less work!!

Braden handled his 6 months shots like a pro! He let the pediatrician check him out without a single tear or whine. Of course, he let out a cry when the shots came. But as soon as I picked him up and sang a couple lines from his favorite song, he let out a smile to the nurse to let he know he wasn’t mad at her. It was really cute and sweet. He picked out a Christmas sticker for doing such a great job! But he was trying to eat it while he was in the car seat, so he was only allowed to look at it on the seat. 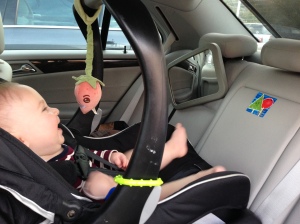 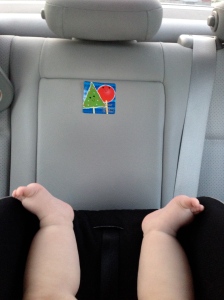 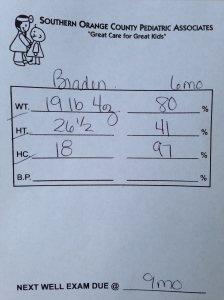 Braden is such a trooper when I take his monthly pictures. I know it’s a bit much, but now that I’ve started I can’t stop. This time he would NOT stop laughing at the balloons. He thought they were the funniest things in the world. It was really cute.

I’m SO proud of my little man! He’s slowed down on gaining weight so fast (thank goodness). He’s a healthy 19 lbs, but killing my arms. Let’s see what happens after he starts solids…

I’m not usually big on holidays, but I am really looking forward to his first Christmas! Ah! I can’t wait!

You make my heart so happy little buddy. I love you! 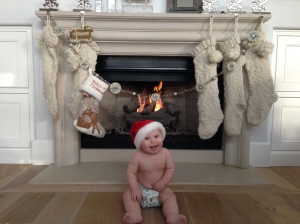 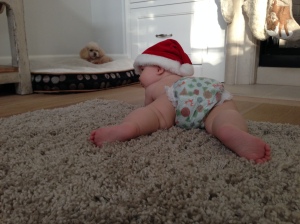 On the night before you turn 6 months old, I can’t help but be so proud of the little person you’re already becoming. What specifically comes to mind, is your genuine happiness and love towards people. I’ve never seen such a beautiful smile. So happy and welcoming to others around you. The other day I was putting you in your car seat. You were looking out the door with the biggest smile on your face. I was so curious to know what was making you smile so big! I looked over, and across the street was our neighbor. You noticed her all that way, and she brought you such joy. She of course, walked on over and exclaimed how happy you are. It filled MY heart with happiness. You ARE happy! Almost always! You show such kindness and warmth towards the people around you. I know you’re only 6 months old, but it’s true.
As I sit here and reminisce about the past 6 months, I think about what I want for your future. Mostly, I want to you to stay this way; happy, joyful, open, and kind. You truly are a blessing to me, and deserve the whole world my little buddy. Thank you for always waking up with a smile and trusting me with your world. I promise to always be here for you, protect you, and guide you. I will do my best to ensure you stay as joyful as you are.
I love you!!!!!
Your mama xoxo 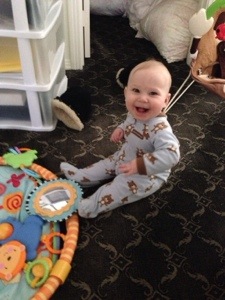 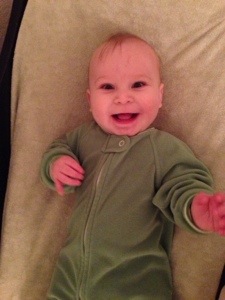 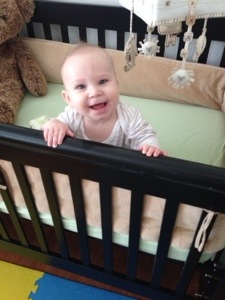